I’m the six-year-old sitting on the second-story fire escape on 32nd Street in Astoria, New York eating corn on the cob and watching a stickball game in progress. Sort of watching. Across the street, I can see into the first floor window where Mrs. Smiddy is swigging a beer; I can see into the second floor window where Rudy is collecting bets. At the side of the building I can see the window where Marilyn, sleepwalking, supposedly turned the clothesline in a parody of jump rope three stories high.

There above the street I’m careful not to spread my legs, since anyone looking up can see my underpants. I’m careful not to cross the imaginary line in the shared fire escape, between my parents’ window and Mr. & Mrs. Levy’s next door. Sometimes their only daughter Frances, who’s older than I am, comes to the window to talk. Frances will become a nurse—partly because her parents got out of Germany before it was too late, and other family members didn’t. I’m tempted to climb the ladder that comes up through the hole in the fire escape, up to the third floor. But my father will have a fit if I start up the stairs. Or maybe I just think he will; maybe he’d enjoy my daring more than my obedience. I won’t find out.

Getting distance, standing outside the action, seeing an angle those on the ground couldn’t, looking into windows: was this the beginning of poetry? (Or the beginning of a lifelong outsider-ness?) At this vantage point, the fire escape becomes my metaphor for poetry itself.

When I was sick with measles, I read A Child’s Garden of Verses until my parents made me go to sleep, those summer evenings when the world deliciously continued while I had to turn off my corner of it. “And does it not seem hard to you,/ When all the sky is clear and blue,/ And I should like so much to play,/ To have to go to bed by day?” The book, inscribed “For Carole from Henry, Christmas 1943” and broken with use, now lives in a plastic bag in a closet. That book was the only place I ever met a “counterpane.” Did poetry begin for me with Stevenson’s meter and rhyme, via Cousin Henry? RAIN: “The rain is falling all around,/ It falls on field and tree,/ It falls on the umbrellas here/ And on the ships at sea.”—showing a world before my eyes and one out of sight, except in imagination, thanks to the images in words. There may have been a tree somewhere on 32nd Street, but there certainly was no field; and I’d have to travel to see a ship going to sea. The only things right before my eyes were the umbrellas and the rain. To these, now I could add my movie house of the mind.

By the time I reached Horace Greeley Junior High School, poetry consisted of “Evangeline” and “The Pied Piper of Hamlin,” the latter memorized and rehearsed for choral speaking at an assembly. Perhaps the other students laughed at my classmates and me; but we had fun growling “RATS.” The drama of the narrative and delicious words won us out of our self-consciousness and 7th-grade goofiness.

In life-transforming William C. Bryant High School English with Mr. Rogoff, we read Millay’s “Renascence” and her sonnets, one of which I memorized—“What Lips My Lips Have Kissed”—as it represented a future ambition for me, the rain full of wishful ghosts-to-be. (Later on I was taught to devalue Millay as a sappy romantic; it took decades for me to rediscover her, the complexities of her poems and their political engagement.) There in high school I came out of my shell briefly to star in a production of “Meet Me in St. Louis” before moving on to Queens College with some of my friends, seeing others off to Ivy-Leagues and faraway campuses. How many poems did I read while hunched over my textbook on the IRT from Queensboro Plaza to Kissena Boulevard, Flushing?

Launched by Mr. Rogoff, I was destined to major in English at Queens, where my literature classes focused mostly on male poets; the working poet on the faculty was Stephen Stepanchev, and once Stanley Kunitz gave a reading. One fellow-student and friend knew enough to be studying Marianne Moore while I was studying. . .what?. . . writing poems in secret; lost and found love. Never in that time, though I loved the music and ardor of poetry and needed its private solace, never did I think I could write, and actually publish, a poem.

My first public appearance as a poet arrived when I was a student in Dr. Parks’s class in Renaissance lit. His assignment to write a piscatory eclogue provided a flash-forward to years at my desk writing poems, though I didn’t know it then. For hours I hunched at the kitchen table in my parents’ apartment, divining for the right word. Time stopped as I lost and found myself in language. Consider it—a kid born in Women’s Hospital in New York City, who grew up in Astoria in a three-room apartment with a lamppost outside the window, no trees—and Astoria Park and Central Park my only ecloguish experience, no fishable fish in either place. Write a piscatory eclogue. I wish I still had it today, but it’s vanished along with other notes of earlier lives. Perhaps it’s just as well I can’t see what a lamentable effort it was. But for what it taught about the artistic process, the transcendent power of poetry—I left that kitchen table!—it was prophetic. 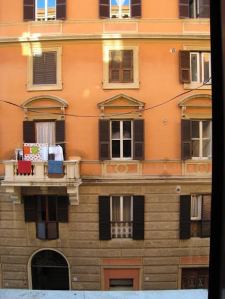 The books followed, along with a succession of other desks: a basement desk in a Boston suburb, a desk at The MacDowell Colony, a table in my room at Bread Loaf Writers’ Conference, a desk before a tall window filled with cypresses at the American Academy in Rome, a teacher’s desk from my children’s elementary school that looks onto a Northern California yard where a Meyer lemon tree danced into a poem in my latest book.